I'm excited to have Carol Kilgore here today--and happier she has another book out in the world. I love the title! 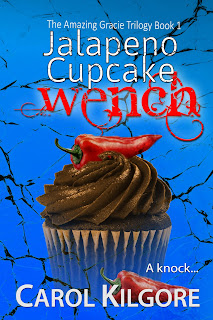 Law enforcement consultant Gracie Hofner is assigned to a trendy San Antonio pastry shop to watch for a delivery. In addition to the intoxicating aromas of sugar and chocolate, she also has to fight her own attraction to the man working beside her, Donovan Beck. He’s a hunk and a half and perfect for a spring fling.

If she had more time, Donovan would rank higher on her to-do list. But the number one spot is occupied by her search for a missing little girl, the target of a killer. Gracie needs to find her pronto, and the odd super-instinct quirk that’s started plaguing her may help. If not, she can always see what happens if it tells her to buy a lottery ticket.

Jalapeno Cupcake Wench is the first book in The Amazing Gracie Trilogy, a story so big, it takes three books to tell it.

Cold! Cold! Gracie Hofner looked down. I can’t believe I did that. While reaching for her buzzing phone, she’d poured the remains of her water bottle, intended for her impatiens, over her bare feet. She pressed the button. “Hi, Nicky.”
“Morning. I’ve got something you may want to see.” The voice on Gracie’s phone belonged to Nick Rivera, her partner.
Former partner. Their paths had been the same—patrol, homicide detectives, and then detectives in the San Antonio Regional Intelligence Center—SARIC. San Antonio Police Department all the way. Except unlike her, Nick had found his niche there.
In addition, they were friends. “Fun or work?”
“Nothing fun about murder, Gracie.”
She went inside for a pad and pencil, greeted by the aroma of the coffee that had brewed while she jogged. “Are we cleared?”
“Negative. Double homicide. Missing family.”
“If the family’s missing, who’s dead?”
“Hector and Therese Cantu. You ever heard of Cantu Electric?”
“Don’t think so.”
“Good reputation on the West Side. They’ve been around since my dad was a kid—started by Hector Cantu’s father back in the fifties. The old commercial was like Cantu can do. Hector’s son runs the business now. Mr. Cantu’s retired. Rephrase—now he’s good and retired. He and his wife are the deceased.”
She moved to the table and put her phone on speaker so she could take notes. “Who’s missing?”
“The Cantus have three kids, two daughters and the son, all grown. Besides the electrician business, the son owns an upscale retail lighting store. High end only. Kim and I went in there after we bought our house. I couldn’t afford a switchplate, much less a lamp or fixture. The son and his family are missing.”
“How many?”
“Three. Husband, wife, daughter.”

Visit the "Look Inside" feature here for more:
AMAZON

In addition to Jalapeno Cupcake Wench, Carol Kilgore is the author of three romantic suspense novels: In Name Only, Solomon’s Compass, and Secrets of Honor. She’s married, guardian to two quirky dogs, and lives in San Antonio, the setting for the trilogy.
Posted by Tara at 10/23/2017

Congrats to Carol on her new book! And I love her cover!

Congratulations to Carol! Wishing her well. Thanks for featuring her on your blog, Tara. Thanks also for stopping by my blog today. Have a wonderful week! :)

I am loving seeing Carol's latest work spread far and wide across the blogosphere. I hope it goes gang-busters.

Thanks for having me here today, Tara. I apologize for being late to get here. My day has been filled with one thing after another that's kept me off any kind of schedule. I keep restarting at square one.

Natalie/Alex - Thank you. It's great seeing y'all around. I appreciate your comments.

EC - Thanks for your good wishes. I've sat in the chair so long, that my work isn't the only thing spread far and wide these days :)

I have so many of those days, Carol, lol.

A big congrats to Carol! This sounds like a really good read :)

Debra She Who Seeks said...

Sounds good! Both the book and a jalapeno chocolate cupcake!

Thanks for your kind words, ladies :)

Jemi, Gracie and I thank you :)